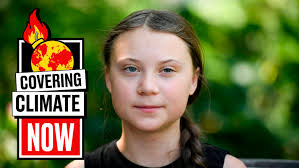 Support our world, our generations and the ones after us, support her, support yourself, and look up more information at this website below:

Thunberg first became known for her activism in August 2018 when, at age 15, she began spending her school days outside the Swedish parliament to call for stronger action on global warming by holding up a sign saying (in Swedish) “School strike for climate”. Soon, other students engaged in similar protests in their own communities. Together, they organized a school climate strike movement under the name Fridays for Future. After Thunberg addressed the 2018 United Nations Climate Change Conference, student strikes took place every week somewhere in the world. In 2019, there were at least two coordinated multi-city protests involving over one million students each.

Thunberg is known for her blunt, straightforward speaking manner, both in public and to political leaders and assemblies, in which she urges immediate action to address what she describes as the climate crisis. At home, Thunberg convinced her parents to adopt several lifestyle choices to reduce their own carbon footprint, including giving up air travel and not eating meat.

Her sudden rise to world fame has made her a leader and a target. In May 2019, Thunberg was featured on the cover of Time magazine, which named her a “next generation leader” and noted that many see her as a role model. Thunberg and the school strike movement were also featured in a 30-minute Vice documentary titled Make the World Greta Again. Some media have described her impact on the world stage as the “Greta Thunberg effect”. Thunberg has been the recipient of numerous honours and awards, including fellowship of the Royal Scottish Geographical Society, has been named as one of the 100 most influential people of 2019 by Time magazine, and has been nominated for the Nobel Peace Prize. In September 2019, she addressed the UN Climate Action Summit in New York.

I am a full time Yoga Teacher, I love to help people self-heal through trauma with using yoga, meditation, and other mindful practices. I am also a photography and nutritionist. My mission is to provide a safe, loving, and healing mindful practice to your daily life to help cope with the traumas that we live through. Trauma is a fact of life, It is NOT a life sentence. View all posts by leefitlife